The Bulls and Bears of global grain

Each month the United States Department of Agricultural (USDA) releases its World Agricultural Supply and Demand Estimates (WASDE) report. This influential report can impact grain prices through substantial changes to supply and demand. The February WASDE was bullish for major grains with wheat, corn and soybean futures lifting.

Weather is also a key driver of grain prices as rainfall or lack thereof can have major production ramifications. Australia has just harvested its largest crop on record with above average production in all states. While Australia has good supply, this is not the case for other major grain exporters.

The next couple of months are the crucial growing period for winter wheat crops in the Northern Hemisphere. Currently in dormancy, winter crops will start emerging in March and April. Recent dry weather in the United States has raised concerns for wheat production. Another poor production year in the United States and Canada would provide support for wheat prices. Australia would benefit from reduced production in the Northern Hemisphere with good supply following a record wheat crop of 38.2 million tonnes according to Australian Crop Forecasters.

The recent WASDE report was bullish for markets but there are some wider trends that are bearish for Australian grain markets. China recently announced it will allow imports of Russian wheat and barley from all regions. Imports had previously been banned due to phytosanitary concerns. This decision means Russia will be able to service Chinese demand which could impact trade flows for Australia. Given Russian production continues to grow due to greater area planted and improvements in yield, they will be able to handle this extra demand without losing too much market share into their other major markets like the Middle East. Exports out of the Black Sea region will be interesting to watch especially given the current tensions between Russia and Ukraine. 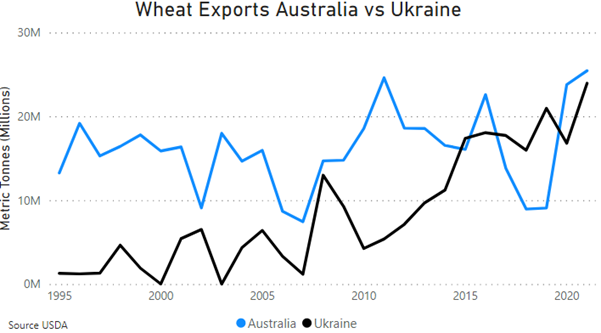