Jujubes – An ancient, exotic superfruit coming to a supermarket (and pub) near you

As local consumers become increasingly focused on their health, an odd-shaped fruit unofficially known as a Chinese date is becoming more and more sought after. This tasty superfruit is known as the ‘jujube’. So exactly what is a jujube, where is it grown, and why is consumption of this ancient superfruit expected to boom over the next decade?

So, what is a jujube?

The jujube, sometimes pronounced as “jujubey”, is a relatively uncommon fruit to see in Australia. While the name is mostly associated with the colourful fruit flavoured gumdrop, it is actually a common fruit in Asian markets. The jujube originated in China and is one of the oldest cultivated fruit trees in the world! There are almost a thousand different varieties of jujube across China. The fruit is well known throughout Asia, Europe and the Middle East for its health benefits and great flavour. In terms of looks, they are about the size of an apricot and have a sweet, nutty flavour with the texture of an apple. Jujubes can also be eaten fresh or dried.

What are the health benefits?

Where is it grown and why haven’t I seen this fruit before?

Over 90% of global jujube production comes from China, though interest in the fruit is growing in Egypt, Iran, Saudi Arabia, and Algeria. Jujube trees tolerate salt and require less water than most fruit trees. As such, Australia has a great climate for Jujube production. Most of Australia's jujubes are traditionally grown in more arid regions. These areas include Mildura, Griffith, and Western Australia. We are now also seeing more growers popping up in South Australia and Queensland as the fruit becomes more widely known. Harvest in WA typically runs from February to April with eastern states finishing a little later. While fresh jujubes are only available during this period, dried jujubes are available year-round.

Poorer quality fruit is also being utilized in interesting ways. Producers are using lower quality jujubes to produce different types of craft beers. The beers maintain the nutty, date-like flavour of the jujube which is carving out its own niche amongst craft beer aficionados.

How much do they cost, and where can I get one?

Jujube production across Australia has only really kicked off over the last ten years or so. Jujubes were first introduced to Australia in 1993 as a part of CSIRO trial to test if Australia had a suitable climate and soil. Unfortunately, the production of jujubes failed to take off, though a recent rise in consumer awareness and stronger demand has seen prices reach up to $20/kg. This attractive price point has seen an increase in growers looking to produce the fruit, with output expected to continue to grow over the coming years. Agrifutures estimate over 1,600 tonnes of jujubes will be produced in Australia by 2026. Australia currently produces over 40 varieties of jujube with Chico and Lu the most popular.  Asian consumers remain the primary consumer given its popularity across much of the continent.  Local demand for jujubes is expected to continue to grow across Australia over the coming years due to its popularity amongst Asian immigrants.

Jujube prices remain elevated at the moment thanks to labour shortages and rising production costs. Wholesale jujube prices are currently sitting at $10.81 per kilo, $1.57 higher in comparison to last year. It is expected that prices will ease over the coming seasons as more and more plantings begin to bear fruit

Do we export jujubes?

Australia does not currently export fresh jujube fruit. The industry is hopeful of opening up export opportunities into Asian markets as production continues to expand, particularly given Australia’s jujube production counters that of the northern hemisphere. This will provide greater opportunities to export Australian grown jujubes to meet off-season demand in these countries.

While they may not be a household name just yet, jujubes are a growing market. If you’d like to try a jujube or jujube beer, they can be purchased from Asian grocers and various fresh fruit markets or your local bottle-o. Plenty of producers also sell direct to consumer via their websites. 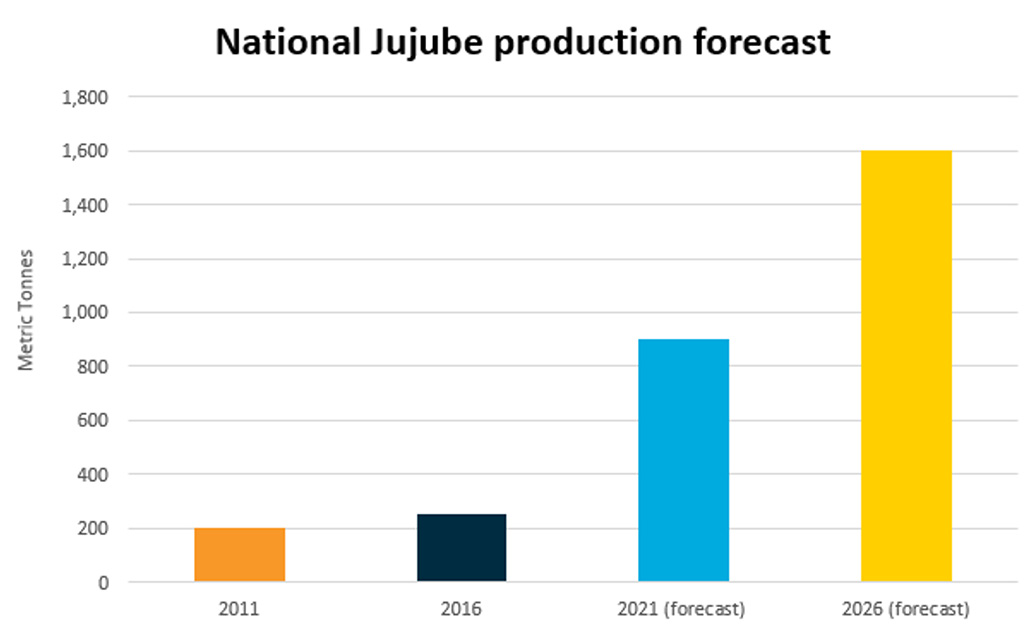