The Bulls and Bears of Global Grain

The supply and demand fundamentals that underpin global grain markets are varied and complex. In grain futures markets a bull market exists when futures are rallying while a bear market occurs when futures are in decline. Weather, production, and trade relationships are a few factors that drive grain futures markets. An influential report released monthly by the United States Department of Agriculture is the World Agricultural Supply and Demand Estimates (WASDE) report. The report details annual forecasts for supply and demand of world grains and oilseeds. Below we discuss the bullish or bearish factors impacting global grain markets.

World grain production has been trending higher in the last few decades. Increased planted area (particularly for corn and soybeans), advancements in technology, seed breeding and management have contributed to this. Yet, production has been relatively flat in the last couple of years due to poor growing conditions in key cropping areas. This is a concern given world consumption continues to rise. 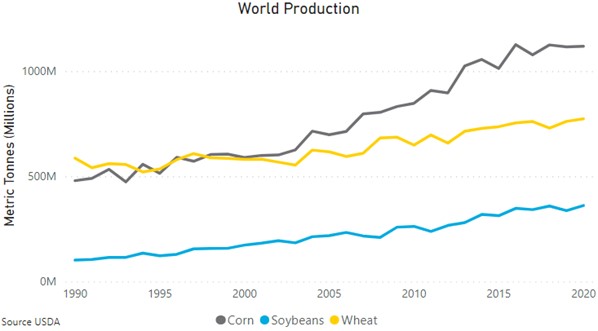 The chart below shows the world consumption and production of corn. From 2010 to 2016, production well outstripped consumption. This meant balance sheets were comfortable and world corn prices were steady. The last three years have seen elevated consumption not met by production. This has resulted in global corn prices skyrocketing. Chicago Board of Trade corn futures have been trading near record highs in the last couple of months due to United States corn stocks being at their lowest since 2012. 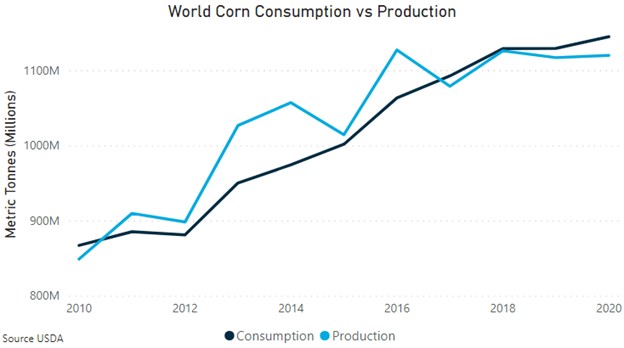 Chinese corn and wheat imports have risen in the past year and are expected to remain elevated into 2021/22. Chinese corn imports are at 26 million tonnes for the current season with the majority supplied by the United States. The rebuilding of China’s national pig herd following African Swine Fever outbreaks increased the country’s feed requirement. Unfavourable seasonal conditions in China meant lower domestic production of feed grains. This has made the country more reliant on grain imports. The increase in wheat imports has been beneficial for Australia. Over 1.6 million tonnes of Australian wheat have been exported to China since October 2020 according to Australian shipping stem data.

World soybean end stocks for the 2021/22 season were increased by 1.9 million mt to 94.5 million mt in the July WASDE. This acted as a bearish force on futures markets though not enough to outweigh the dry weather concerns that are ultimately bullish. Stocks are still much lower than the peak in 2018 and weather forecasts are the driving force behind market changes.

World wheat production will marginally exceed consumption in the 2021/22 season with improved seasonal conditions in the European Union. This will lift world wheat production to a record 792.4 million mt. Increased wheat supply could see global wheat values soften. Chicago Board of Trade September 21’ wheat futures have eased from their peak in early May, now at 684 US cents per bushel (A$342 per tonne) as of Friday 23rd July.