Spring is arguably the most important season for the sheep industry as new season lambs begin to flood into markets. As such, we’ve chosen sheep as the first subject to kick off a new series on ‘Big Things’ across Australia. Big things are considered a particularly distinctive and home-grown form of folk art, often located in agricultural regions, and help to provide visitors to regional areas with a sense of the town’s identity. They say Australia rode on the sheep’s back, and as you will discover, some of those backs sit high off the ground.

The final “Big Sheep” in Australia is the Big Merino in Blackall, Queensland. Standing at three metres tall, the Big Merino is the third largest of the “Big Sheep”. This perhaps signals the potential for growth in Queensland’ sheep industry which is the sixth largest in the country. Queensland’s sheep flock of two million in 2020 was just under Tasmania’s flock. However, Queensland’s sheepmeat production is less than half of Tasmania’s with less than 3,000 tonnes produced in 2020/21. The future for Queensland’s sheep industry is bright with the development of exclusion fencing in parts of the state encouraging producers to rebuild sheep flocks.

South Australia is home to the Big Ram in Karoonda. At two metres tall, the Big Ram is the fourth largest of Australia’s “Big Sheep” which is fitting for a state with the country’s fourth largest sheep industry. The state’s 10.2 million sheep account for 16 per cent of Australia’s flock. From those sheep, 71,000 tonnes of sheepmeat and almost 50,000 tonnes of wool was produced in 2020/21.

Tasmania has the fifth largest sheep industry in Australia but does not have a “Big Sheep”. There were 2.2 million sheep in Tasmania in 2020, which was three per cent of the national flock. The state’s sheep and wool industry is a relatively small part of a diverse agricultural industry. With a greater emphasis on cattle and dairy production, sheep and wool accounted for only 7.2 per cent of the value of agricultural production in 2019/20. This was just below the combined value of apple and cherry production.

At this point, you may be wondering about Victoria. Victoria is a big player in the national sheep industry. Just under half of Australia’s sheepmeat was produced in Victoria in 2020/21 (47 per cent) and it is home 15.2 million sheep, the second largest flock in Australia. But surprisingly, Victoria does not have a “Big Sheep”. The closest tribute to Victoria’s thriving sheep industry is the three metre tall Big Wool Bales in Hamilton. This is fitting as Victoria was Australia’s second largest wool producer with 29 per cent of production in 2020/21.

There is a great selection of “Big Sheep” across Australia, but it is clear that there is one “Big Sheep” still to be made. With Victoria’s sheep industry currently thriving with strong prices and rebounding production, it is a fitting time for a “Big Sheep” to be built in the state. Perhaps even one to rival “Rambo” and lay claim to Victoria being the premier sheep state. 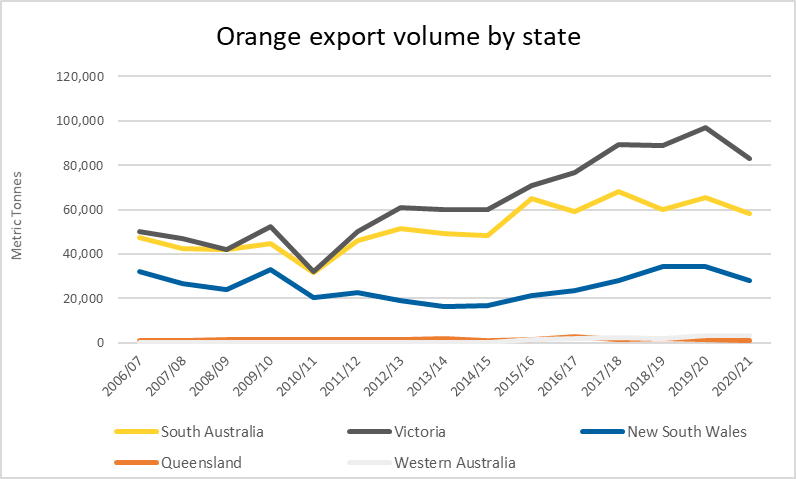