How high can(ola) prices get?

With a record canola crop on the way and near record prices, we take a look at what is driving values.

Before midway through last year, $650 to $700 per tonne was a good price for Australian canola. Since March of last year, prices have continued to climb and peaked around or above $1,000 per tonne in October. Prices have eased a bit since then but remain around $900 per tonne. Australian production is forecast at a record 5.7 million tonnes this season, 66 per cent above average. 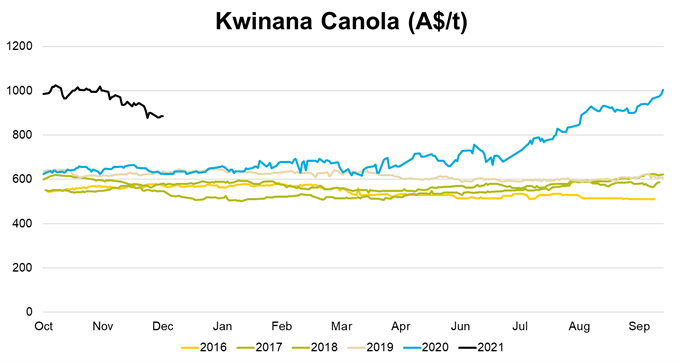 Canola prices are sitting at prices not seen before last year.

The name 'Canola' was originally a trademark name of the Rapeseed Association of Canada. The word canola is a condensation of "Can" from Canada and "OLA" meaning "Oil, Low Acid". Canola is a variety of rapeseed characterised by low erucic acid. Sometimes, 'rapeseed oil' is used to refer to the oil for industrial purposes, where 'canola oil' refers to the edible cooking oil.

Why are prices so high?

In short, Australian prices are near all time highs due to a global shortage of canola. The United States Department of Agriculture (USDA) estimates 2021/22 world canola production to be 67.5 million tonnes. This is a year-on-year reduction of seven per cent, and six per cent below average. While this may not seem like a lot, if we dig a bit deeper it becomes clearer why. Canada is not only the world's largest producer of canola, but also the largest exporter by a long way. In an average year, Canada exports around ten million tonnes of canola. In an average year, Australia exports 2.5 million tonnes. But due to a severe drought this year, Canada has produced less than 13 million tonnes compared to around 20 million on average. The USDA estimates Canada's exports this year will drop from around ten million tonnes to 5.7 million tonnes. This leaves a four to five million tonne gap in canola available to importers. Buyers are driving up prices in an attempt to secure the stock they need. 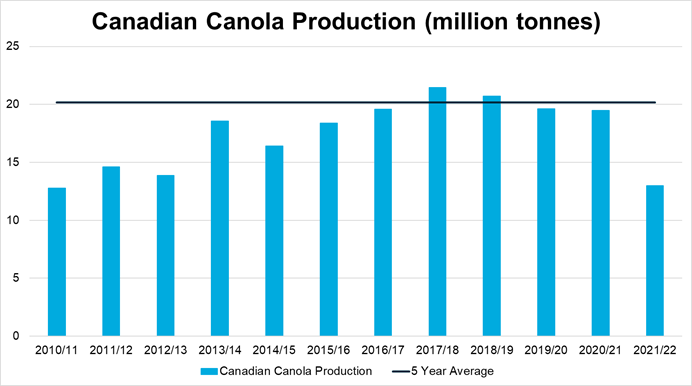 Canadian canola production is at its lowest level since 2010/11.

But that's not the only reason:

Canola is widely used in biofuel production. When blended with diesel it can be used by passenger vehicles, trucks, and even industrial equipment used in mining, forestry, construction and agriculture. As the world recovers from COVID-19 and more vehicles get back on the road, demand for biofuels is increasing.

Because biofuel competes with 'regular' fuel, its price is affected by crude oil prices. In October the price of crude oil hit its highest point since 2014. This has raised the price of biofuel, and in turn canola prices.

So how long will high prices last?

While there are other factors contributing to high canola prices, the fundamental reason is a global shortage of stock. The only thing that will rectify the situation is more supply, which means any price decrease won’t happen until northern hemisphere harvest. The Brazilian soybean harvest around April/May will ease some pressure on oilseed demand. This will likely see lower Australian prices. Assuming Canadian production rebounds to around average production, a significant drop isn't expected until harvest which starts in September next year.

In the meantime, Australian canola growers can enjoy the good oil of very high prices and strong demand.