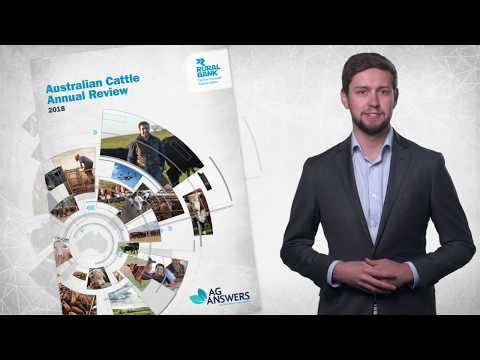 Australian cattle price and production trends in 2018 have largely been dictated by dry seasonal conditions in many cattle producing regions. Australian beef production has trended higher and prices have eased in response. Fortunately, demand from Australia's major export markets has strengthened, absorbing the additional production volume and giving support to prices.

Cattle producers entered 2018 with intentions to retain stock and rebuild herds, but seasonal conditions have not been favourable to facilitate this. Rather, below average rainfall has seen many producers opting to destock. This has led to slaughter rates trending higher and beef production for the year to September being 7.6 per cent higher than 2017. The increase in slaughter has come entirely from an increase in female cattle slaughter, which has accounted for greater than 50 per cent of total slaughter since April. This is an indicator of the national herd in a liquidation phase and is a key factor behind the forecast of a lower herd in 2018.

The increase in supply has been a primary driver of easing prices, along with the retreat of restocker buyers who were previously offering support to prices, but have been deterred from markets due to unfavourable seasonal conditions. The eastern young cattle indicator (EYCI) has averaged 508c/kg for the year to date in 2018, 16.4 per cent lower than 2017. Despite the recent decline in prices, cattle markets are still high from a historic perspective, 17 per cent above the 10 year average.

Cattle markets have received support from strengthening demand for beef in major export markets. The growth in Australian supply has driven export volumes 14.2 per cent higher than 2017 for the year to August. Volumes have increased to all major markets such as China (+55.7 per cent), South Korea (+23.1 per cent), Japan (+12.5 per cent) and USA (+2.6 per cent). Growth in Australian export volumes has occurred despite a record year for global beef production and exports, as global demand has risen to match the growth in supply. The outlook continues to favour beef exports with demand set to continue growing and supply increasing, albeit at a slower pace than recent years. This should boost confidence within the Australian cattle industry as it strives to expand when conditions improve.

Export demand will continue to provide support for Australian cattle prices, however it will be seasonal conditions that have the most significant influence on the industry in 2019. Continued dry conditions would see current trends of easing prices and elevated slaughter continue, while widespread rainfall would see the industry switch into a herd rebuilding phase, creating a surge of restocker demand and a tightening of supply, resulting in a sharp upwards spike in prices.

The seasonal outlook currently indicates that below average rainfall will persist, including an increased likelihood of El Niño for the end of 2018. This suggests that a continuation of current market conditions is the most likely scenario in the short term.